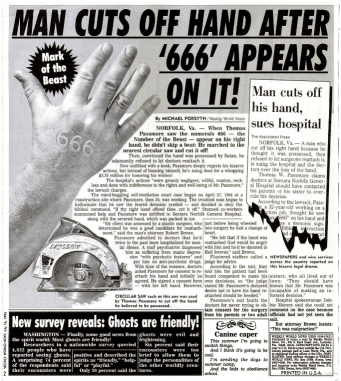 On or about April 27, 1994 in Kill Devil Hills, North Carolina, a construction worker by the name of Thomas W. Passmore was possessed with thoughts of The Devil and believed that his own right hand was evil. He was employed to work there at a construction site, where he decided to cut off his hand with a nearby table saw. His coworkers, who found him shortly thereafter, managed to preserve his hand and take him to Sentara Norfolk General Hospital in an effort to help him. When the hand surgeon at the hospital, Dr. Tad Grenga, asked Passmore for his consent to medically re-attach his hand, Passmore refused to give it all the while insisting that his right hand was evil. A small number of years passed and, according to the September 11, 1997 edition of the Sun Journal, Thomas Passmore sued Dr. Grenga and the hospital alleging that they “should have known he was psychotic and overruled him.” The hospital staff, before sowing Passmore’s wound shut, consulted a local judge, who said to abide by their patient’s wishes and that if they did re-attach the hand, Passmore might then be able to sue the hospital for “assault and batter.” This judge also declared Passmore legally “competent” and advised them to not re-attach the hand. Passmore allegedly took himself off of anti-psychotic medication around one year prior to the incident. An online medical news site, MedScape, consulted with Denver attorney John R. Fitzgerald on the details of these proceedings. As quoted, Fitzpatrick states: Passmore also sued the hospital. He, represented by counsel took his case to trial which last a total of nine days calling upon several medical expert witnesses at that time. After only thirty minutes of jury deliberation at trial, ultimately lost his claim. “You may wonder how a case this frivolous was allowed to proceed, but the plaintiff’s attorney had expert witnesses lined up saying that the surgeon and hospital should have operated,” said Fitzpatrick. “As long as an expert was willing to testify, the judge felt he had to let the case go on.” So, would you call this case frivolous? The implication here seems to be that medical experts waste the resources of the court. At Homestead, we could not disagree with that sentiment more. According to the MedScape article, the psychiatry group of the hospital settled for a six-figure amount with Passmore. The issue of consent here is certainly interesting to say the least. We’d love to know your thoughts! Write back to us at info@homesteadexperts.com. And, as always, should you need a trusted, unbiased medical expert to review your records, provide a deposition or anything else of that nature, give us a call or email today! We look forward to hearing from you soon.